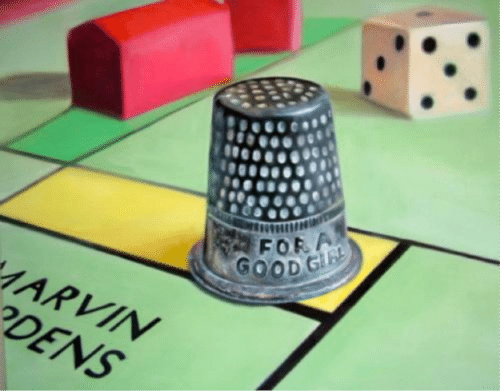 DO NOT PASS GO

Here’s some fun for a freezing-cold Thursday: Melanie MacDonald’s “Do Not Pass Go” opens tonight at 1142 Queen West. A suite of hyper-real paintings depicting board games — and Monopoly in particular — in extreme close-up, MacDonald’s board’s-eye view gives these familiar amusements an arresting sense of formalist gravity; a gifted renderer of light, MacDonald’s painterly skill embues these banal pastimes with an eerie sense of contained menace — a gift she’s used on other oddly unremarkable forms as well. A standout is her series of portraits of realtors painted from the thumbnail-sized snapshots that show up in mailbox flyers.
Anyway, maybe it’s the bubbling up of raw childhood competitiveness, maybe it’s nostalgia or maybe I’m just agape at the text embossed on the thimble — I was always the thimble; I had no idea — but something about these scenes unnerve, in the best possible way, like a not-quite-recalled memory, vexing in its haziness. Only until Dec. 22, at an oddly vacant space next to the Drake (MacDonald, from St. Catharines, is represented by the A.K. Collings Gallery in Port Hope). I’m guessing it’s a quick-hit opportunity to give MacDonald some much-deserved big city exposure. My wild guess: It’ll go over nicely.