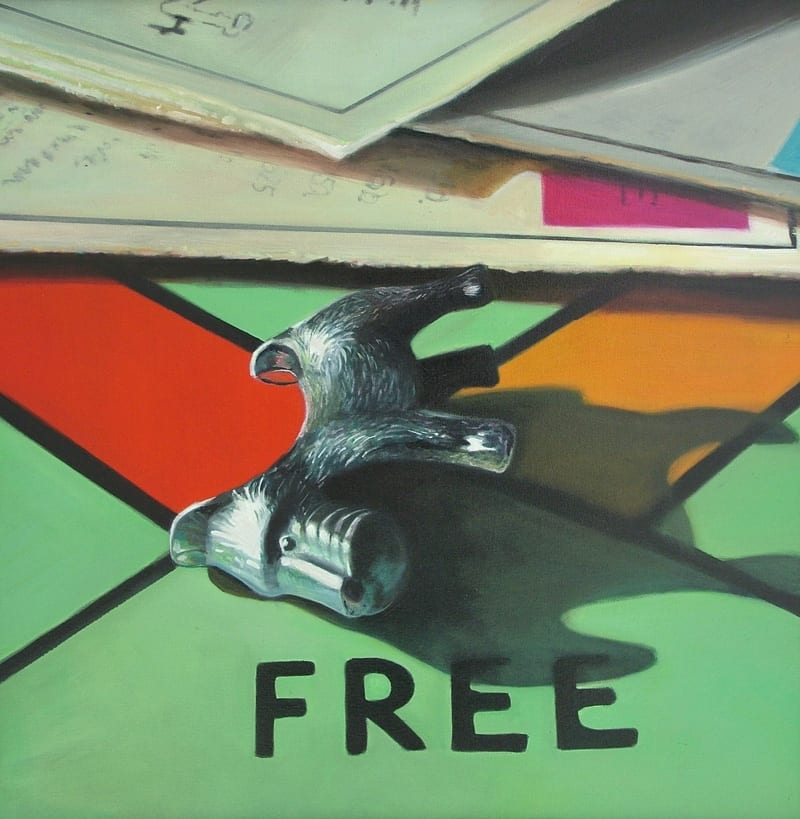 Interview with Mike Landry in Things Of Desire

From the title “Do Not Pass Go,” I guess we can expect to see more of your board game paintings, what else will make up the show?

The show is a dozen paintings of Monopoly boards. They’re partly inspired by an episode in the final season of the Sopranos where a fight breaks out between Bobby and Tony during a Monopoly game. Tony ends up with Monopoly houses and hotels stuck to his face. I didn’t see this episode until after I’d started the Monopoly paintings over a year ago, but in this latest series the board’s all messed up. They’re chaotic scenes of the board in disarray, when the rules no longer apply.

You’ve been working with Monopoly for a while now. What keeps you interested in that in particular?

As a kid I was never particularly interested in games, including Monopoly. When my friend Larry, a Monopoly fanatic, asked me to make a painting of the game I had to borrow a set, but I was immediately blown away by the colours, the design of the board and the graphics, the pewter playing pieces, the wear on the cards and money. I liked the challenge of trying to combine all those elements. Right around the time I started the series, the recession was beginning in the US, led by the mortgage crisis. The paintings started to connect to other things that were happening. I also became a first time home owner and landlord last year so that probably factors into my ongoing interest as well. What I’m discovering is that the game can be used to suggest narratives and criticisms.

Working in “kitchen-sink realism,” how do you set up your work? Do you have a particular monopoly board, etc. That you paint like still life? You also call your work “visual poems marking the brief, curious, moments that punctuate the everyday.” I’m wondering though if your work stems from particular moments you experienced yourself, or whether your work is an attempt to recreate these moments for the viewer. If so, what does this say about these sparks of curiosity?

I work from my own photos, so composing the image and getting the light is a big first step. I like playing with scale so I use a macro lens to get the details of surfaces like crazed porcelain. I also like to play with reflections so that these cloistered miniature worlds also allude to the larger world that surrounds them. When I initially started painting domestic stuff, like dishes piled in the sink, I wasn’t staging them, but the board games are all contrived. It’s not like anyone is actually playing these games out. They’re fictions, but I think you tend to wonder what the rest of the game, the moves being made before or after, might be. I think the still life—done right—is a channel to the general, to some of the larger curiosities of life, but you get there through the particular. I’ve always like that flip.

You refer to your work as “contemporary domestic paintings.” Could you explain to the readers what this is, and how you came upon it as your focus?
I think I’m probably what would be described as a regionalist painter. I make work that’s inspired by my immediate environment, as immediate as what’s in my kitchen. Even stuff like the portraits of the realtors, they were all painted from their dime-sized photos printed in flyers that came through the mail slot of my front door. I don’t think that the artist has to assume this lofty view of the world to communicate and explore interesting territory. Some of the most interesting things get overlooked everyday.

Hearing my own artist statement spouted back is killing me. I sound like I’m some kind of deeply spiritual person and I don’t think I am. I guess we all agree that our lives are brief and a lot of our time in this part of the world is spent collecting stuff. This speaks to all sorts of longings and I like considering that. I also think the fact that the worthless kitsch that’s in a lot of my paintings has outlived someone and will likely outlive me. That’s eerily compelling, it underscores the shortness of the ride.

I hate to be post-modern, but does your work aim to show the futility of trying to see something in our consumer world? I’m wondering if choosing to paint “within a close-up domestic foreground” could be a mirroring of our attempt our unrealistic dream to find meaning in these consumer goods.

The kitsch and the banal things that feature largely in my work probably do speak to some kind of futility. Kitsch, by nature, makes the precious cheap, but we are always seeking these things. We have a desire for them. You could argue the things we accumulate are our futile answer to longings for a kinder, simpler world. In that way, they could be seen as unfortunate by-products of everyone’s longings for that world. And they can become more beautiful in that regard.

You are also painting portraits of “skids” how does this relate to your work with kitsch?

The series I call “Dig it Skid” comes from graffiti on a rock-cut along the Trans Canada Highway near Sudbury. Though I was pretty well off growing up, I went to a high school in a poorer part of town and hung out with a lot people who were called skids. I don’t know if there’s any relationship really, other than notions of class distinction factoring into both projects. The paintings are also made from found photographs, so like the kitchsy figurines, the skids portraits are also paintings made from lost things with unknown histories. The skids probably have more to do with the series of portraits of realtors I’ve made. Both of these painting projects investigate notions of the authentic and the gaps between identity, the photograph, and the painted portrait. I will say this, the skids were much more fun to paint!